One year ago, there were just 9,000 of them… now their number has increased to over 50,000 fans who liked Chouffe France's Facebook page! Thanks to several recruitment campaigns and by creating fun content at special times during the year, the number of Chouffe fans on the Facebook page has grown steadily in the past year!

Duvel & and the International Design Biennial

Saint-Étienne, which is one of UNESCO's Cities of Design, is hosting the International Design Biennial from March 21 until April 22, 2019. Duvel is a partner of the City of Design in the margin of this event. This excellent choice only underscores the link between Duvel and design.

Barabaar, a trendy beer bar in Lyon's 6th arrondissement, joined the Chouffôté program on Thursday March 21, 2019! That evening, the pub adopted a wooden gnome called Mouss’, which became its official mascot! Mouss’, an idea of the Rhône-Alpes sales team, has been a huge success in the program. After he was officially installed on a stele, the resident Chouffe fans wearing their red bonnets were able to worship him all evening! 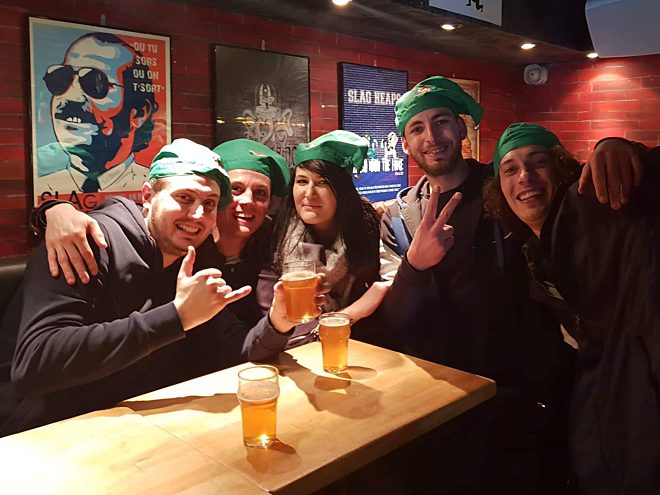 What happens when the gnomes invite themselves to St Pat’Chouffe's Day!

For the second consecutive year, the Achouffe gnomes invited themselves to the traditional Irish Feast of Saint Patrick, or Saint Patrick's Day. Lured by the irresistible sound of the bagpipes, gnome Marcel and his mates traded in their red pointed hats for green ones for the occasion, for a 360° French brand activation, which they renamed St Pat'Chouffe!